My name is Lawrence Rambo. In 1991 I was working for a sound company in L. A. called Electrotec productions. During my time there I became familiar with a connector called the Amp® Quick Latch®. One of its main applications was on the Gamble® EX series consoles one of the most sought after mixing boards of the time.

As are many companies Ramtech was started in a garage in Van Nuys California. At night and on the weekends we would do assemblies for extra money and got to be known as the place to get Quick Latches® fixed.  When Amp® discontinued the Quick Latch I went around to military auctions (The Quick Latch was originally a military communications connector) and bought surplus connectors in order to continue to service Quick Latch customers.

Growing tired of customers rapidly requesting Quick Latches from them, Amp® wrote me and asked me if I would be interested in obtaining the rights to the connector and continuing its manufacture.  With the help of an Amp® engineer I set about tooling a new plastic injection mold and other components. I redesigned the handle, handle cam and inside working parts to my own specifications and in 1995 released what is now known as the RAMLATCH®.

Over the years the connectors and my designs became an industry standard in the Pro audio touring world and has since crossed over into Television, Broadway and even back into military applications.

Unlike most companies that start in one area of an industry and then expand into other area Ramtech choses to focus all of its talents on making the best professional audio interface products available.

To this day all Ramtech products are made in America by American workers most of who have been building the products for more than 15 years and ninety percent of all components in a Ramtech assembly originate in America.

RAMTECH® continues to produce the RAMTECH product line and is the lean focused company that made it successful in the first place.

Please give us a call or drop us an email today to discuss what we can do for you. 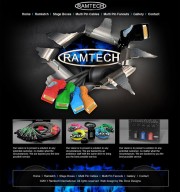